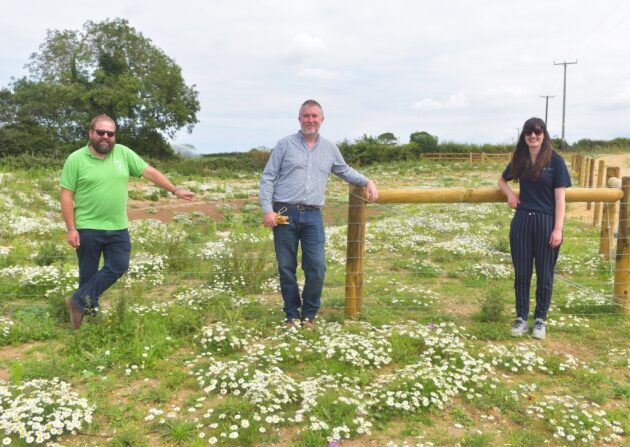 Deepdale Farm near Burnham Market is embarking on a bold transformation which includes converting 60-80pc of its arable land into environmental features. Article by Chris Hill, Pictures by Brittany Woodman

A north Norfolk farm is preparing to convert up to 80pc of its arable land into environmental features as part of a radical “regenerative” transformation to boost its business resilience.

Deepdale Farm in Burnham Deepdale has endured a tumultuous year – suffering a family bereavement and destructive floods during winter storms, followed by drought in the spring and the economic shock of Covid-19, which has put other business projects on pause, including its popular backpackers’ hostel, campsite, shop and café.

But farm owner Jason Borthwick said these challenges also gave an opportunity to reflect and re-evaluate his approach.

He said agriculture is bracing itself for further “seismic changes” after Brexit, as the government phases out the EU’s system of direct payment subsidies – without which his 650-acre farm ceases to be economically viable.

So while the UK’s replacement scheme of environmental payments is still being developed, he has decided to enter a five-year Countryside Stewardship agreement, starting in January, which will take 60-80pc of the arable land out of food production and instead pay for the creation of habitats and food sources for pollinators and wild birds.

Mr Borthwick said the scheme offered a guaranteed income and would complement the farm’s other diversifications as the ponds, hedgerows, woods and wildflower fields would attract wildlife which will expand the site’s tourism appeal.

And it will also free up management time to explore yet more potential alternative income streams, with 19 five-hectare plots of arable land being kept to trial crops such as low-input wheat and barley, or even grapes.

Mr Borthwick said: “We needed to look at every aspect of the farm and work out how it pays for itself in a different way, so that we are in a situation that when we stop getting government funding, which makes us non-viable as a farm, we have come up with a whole bunch of alternative income streams.

“The great thing about stewardship for me is it brings a relative level of stability as we know what income we are getting for five years. That allows me to pay the bills, keep the staff on and switch on the lights every day. And it will reduce the amount of work we need to do going through the year and give us some more time to do project work, where we can actively sit down and say: What are we going to do with 45 acres of woodland? What are we going to do with a big grass area, or a barn that has not paid for itself for 40 years?

“I have ever been to a farm anywhere in the world that hasn’t got opportunities. Whether you want to take them or not is a completely different matter.”

Mr Borthwick said another key factor was the need for the soil to “rest”.

“It has been worked really hard for 30-40 years and it needs some time off,” he said. “The most logical way of doing that is to make it part of a stewardship scheme, because then it gets five years of mixes that will put biomass back in which really help us repair the soil. That is the key thing for us.

“Five years is long enough to let the soil recover, and for us to try some interesting things with our 19 five-hectare pieces around the farm. Those will be rotated on an organic basis, so we will have roughly 20ha of low-input barley, 20ha of low-input wheat, maybe 20ha of something else like rye or something like that. But if we wanted to we could take some of those out and put in grapes or agro-forestry, or try something else. There’s a very good vineyard a mile and half from here, so there is no reason why that couldn’t work.

“It could be completely the wrong thing for us to do, but we’ve got to be able to have enough time to investigate those projects, otherwise we won’t have anything useful at the end of this.”

Another major influence for change at Deepdale was Mr Borthwick’s father Alister, the farmer who began the diversification of Deepdale Farm more than 30 years ago. He died in September.

“One of things I could do is dramatically reduce the fire-fighting you are constantly doing on a farm. Because if we are going to ever have enough time to find those alternative incomes we have to have enough time to do that rather than constantly being pulled from one thing to another thing to another thing, and never really getting any project work done.”

The farm’s transformation journey was sparked by the storms in January and February, which required emergency flood mitigation work after rainwater carved channels six feet deep into the fields and sent run-off onto a neighbouring property at the bottom of a hill.

With the help of Norfolk Rivers Trust and the Norfolk Rivers Internal Drainage Board, preventative measures have also been installed including planting 430m of new native hedgerows, sowing cover crops to defend the soil from erosion over the winter, and creating new ponds and ditches to slow the flow of water and capture run-off.

The farm’s managers realised these features fitted well with Countryside Stewardship, as well as improving the landscape for visiting tourists and bolstering the resilience of the soil.

Estate manager Nathan Nelson said: “These periods of extreme wet and extreme dry have taught us that we have work to do on the soils on the farm.

“The work we are doing with the Norfolk Rivers Trust through their Water Sensitive Farming initiative is about acknowledging that we will have to deal with situations like this again, but we will already be in a better position to deal with it now if we get extreme rainfall.

“By putting cover crops into the fields, we are covering the soil to help reduce erosion – when it becomes extremely dry soil is susceptible to being blown away, so cover crops are protecting the field from that, but what they are also doing with all their root systems is helping us to retain some of the moisture in the soil.

“They are building a huge amount of organic matter back in the soil and fixing nitrogen, they are also doing lots of other good things for us. It gives us more resilient soils for if we have loads of water falling, or also none at all. We can deal with the extremes.”